Henry, Henry, Henry, hours turn in to days, days turn in to weeks, weeks have turned in to months and I am so fearful of when that turns in to a year and then many years. I just want you here, I want you back, every inch of me just wants you and that’s something I have to remind myself daily I can not have.

Days start off generally the same, with me waking up and I am instantly reminded, there’s no reprieve, no break, instantly I am reminded I have to get up and face another day without you. This is my life now, this is it, that will never change, it will always be the case and I wonder each day what that looks like? how that looks? how we keep doing it. The pain is still there, the pain of missing you, I have certainly learned to start to function better, however there are moments when the grief hits and it’s still so crippling, sometimes I can not choose when that is, where it may occur and often it is times when I quickly still need to retreat from somewhere or situations before the tears start.

Your Dad consistently over this past weekend asked several times “What do you want to do?” “What do you want to do?” he asks again, my answers are always similar either “I don’t know” or sometimes “I don’t care” …. I don’t care what do we do Henry, I want to be looking after you, if you were here I am sure we would never be bored, we would have walked with you to the park, taken you to the beach, on days where it rained we would have put a large rug out on the lounge room floor to lay and spend time playing with you, we would have danced with you in our arms in the kitchen, we might have taken you outside to see and feel the raindrops on your face, body, hands, see them fall on to your nose, watch as you may have screwed up your face as they fell on you not knowing what to think, we would have laughed, maybe you would have too.

Maybe we would have even taken you away somewhere for the long weekend, maybe we would have went camping, stayed somewhere we could take and show you something new. Walked through the bush, explored the trees, let you feel the grass and dirt under your toes. Yes Henry we could still go away, we could still go for walks, we could do all these things, but I don’t want to be doing them just or the sake of it, just to be busy. Sometimes I feel like I do not even remember what your Dad and I used to do, how we filled our days.. Perhaps it is because our lives were so busy with work, with me working away usually once a fortnight, your Dad doing shift work, it meant there was limited time together to get things done, so we were caught up doing what we needed to.

Now I get those things done and I’m not sure what else to do, I just want to escape at times, I just want to run, other times I want to hide, I do this dance between the two, I dance between thinking I am so capable and could do so much too being so overcome with grief and feeling like I can’t do anything but basic day-to-day tasks. I am so lost.

You used to SUP, garden and swim, people might say, you used to share stories and pictures of the puppies, I do know your Dad and I did things Henry, and I know we are still doing and need to do them again, what can be difficult for others to understand is that right now, those things are effort, but they are things you used to enjoy others might say, whats hard now is, well everyday is hard so even things we used to enjoy, it can be hard at times to find that joy in them.

Last night Henry, last night as we got in to bed, flashbacks from the hospital straight away, my breath got faster, my mind kept going, I felt out of control and as my heart-felt like it would beat out of my chest, sobs large loud sobs started, your Dad turned to me pulling me towards him and held on to me so tightly “Breathe, deep breaths” he tried to remind me, the sobbing continued “It hurts, it hurts” I said to him between sobs, “It does every second of the day” he replied. I couldn’t stop the tears, I couldn’t fight the pain, your Dad just held me as tight as he could “I don’t know how to do this” I said crying harder “We do it for each other, we do it for him” your Dad said to me, I cried until I fell asleep.

Today we went to the beach, we went to your beach, the beach we have spent so much time, the beach your Dad and I swam at while I was pregnant with you, where I rode the SUP in on my knees, where we watched you move in my belly as I got in the cold water and where we later cried tears as we said our final goodbye to you.

Your Dad he got in the water there today to take photos, as we walked down on to the sand there were families everywhere today, being school holidays they were there on the beach, we walked past a blue tent as I went to sit down I noticed a mum with her baby sitting under the blue tent…. Trigger, I had to move….

As I sit on the sand and tears fall behind my sunglasses, they don’t know.

The grandmother holding her grandchild hand as they walk along to find the perfect place to sit their belongings, she doesn’t know – she doesn’t know that we had thought we would do this with you.

The parents sitting in the sun watching their children build sand castles, they don’t know – they don’t know that’s where your Dad and I stood in that sunny spot on the sand releasing butterflies in your honour, one by one as the butterflies flew from my finger in to the air and away.

This afternoon a little laughter Henry, some small joy and smiles in our day. We went with your Nanny to see some lambs, two sets of twins, two only two weeks old and the other two, three weeks old, I got to hold them, cuddle them, have them nuzzle in to my shoulder, they were so very cute, we also saw alpacas, baby birds, roosters and chooks. It was nice, nice to explore to see the animals to hear about their stories. It was nice to smile. As always though a piece of me wishes we had been taking you to see the animals to share that experience with you. 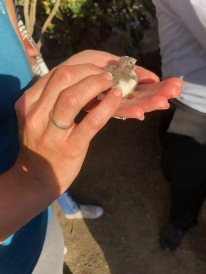 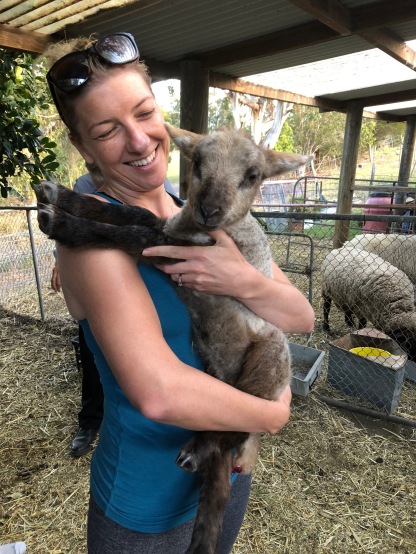 Today marks the start of my period, again, again Henry another month no sibling for you, another month of facing that disappointment on top of our grief, another month of wondering why? and will I ever get to hold your sibling in my arms, or will that not happen for us? Were you my one and only child? and I don’t get to have you here? can the world be that cruel? can it be that cruel to someone who has all this love to give?

Your Dad Henry, the beautiful man that he is, he recently entered a competition through a gluten free magazine called Austrlian Gluten Free Life I didn’t know he entered this competition, it was to win a hamper from Byron Bay cookie company  I didn’t know he had entered until I saw an email in our inbox to say he had won. I looked at the email wondering what is this, then Henry, then I read his entry….. Tears, tears streamed down my face as his simple entry it talked of you, it talked of how much he’d love to spoil me with some cookies on your beach, so we could sit and enjoy them together thinking of you. I cried as he is so thoughtful, I cried as he included you, I cried because it was so lovely he had done this and I cried as he won. Today that hamper arrived so we got to be at your beach at sunset to enjoy some of the really delicious cookies together, and although we wanted to eat them all at once Henry, we thought we better ration them out.

Your Dad Henry he is amazing. 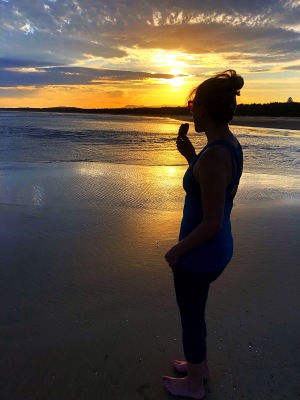 Tomorrow is another day Henry, but I have to get through tonight first. Tomorrow I wake up to this reality, the one I am unsure how we survive, tomorrow I make myself get up again, to do the day, to feel however it is I find myself feeling, to fight, to battle through. Tomorrow I will still love you. The last line of my wedding vows to your Dad was ‘I swear I couldn’t love you anymore than I do now and yet I know I will tomorrow’ the same goes for you our beautiful boy. 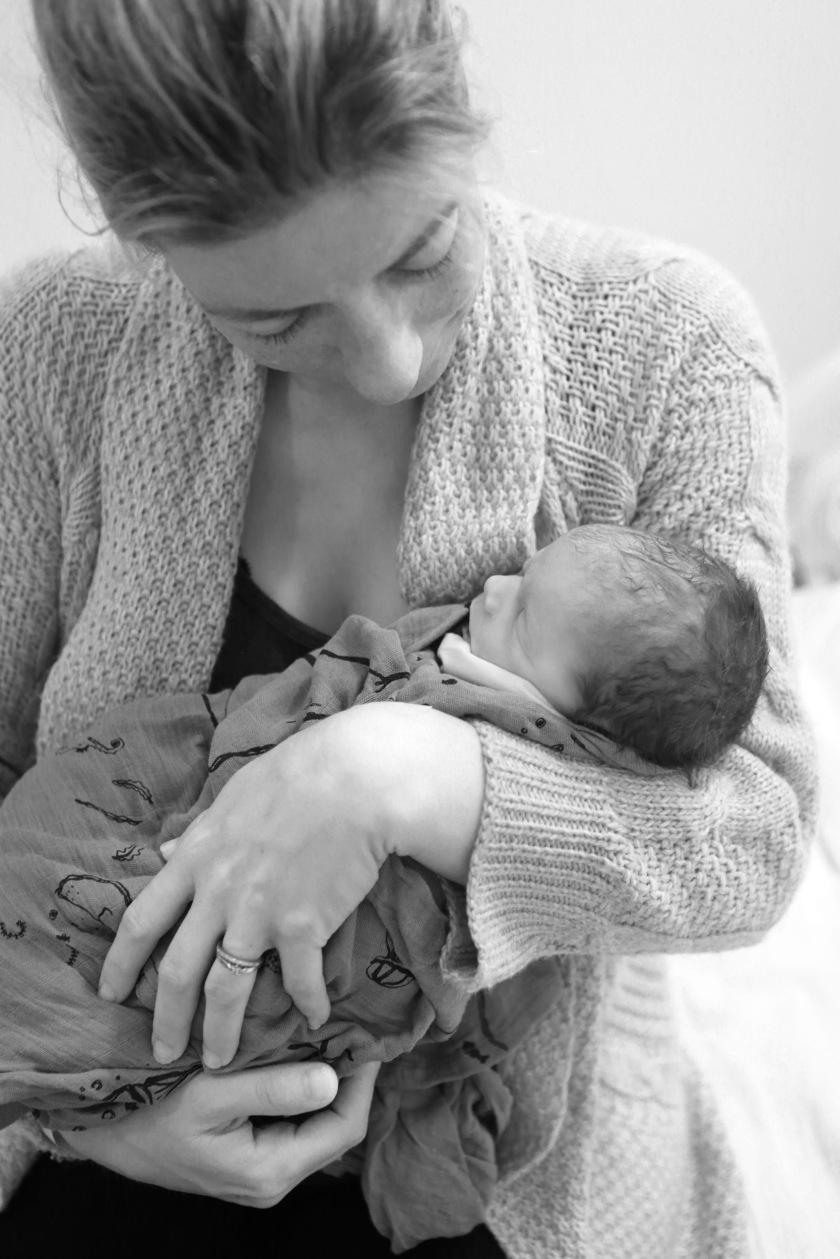 My husband and I live on the beautiful south coast of NSW, Australia. We are currently learning to rebuild and navigate through life after the loss of our son Henry to stillbirth due to medical negligence in April 2018 and learning to parent after loss with Henry's little sister born in August 2019.. View all posts by Letters to Henry